We were still undecided about Gileboom’s slogan after two years of launching it …until Arash came. Sometimes it is hard to focus on something general, like a slogan, when you are neck-deep involved in the details of the work. So we thought of asking Arash to suggest a slogan for Gileboom. He pondered for a little while and then said: “How about Bia Pish, which in Gilaki means ‘come on in’. It would be like you are inviting the guests to come inside Gileboom and check it out for themselves.” Simple as that.

During the Safavid dynasty (1501-1736) and the reign of Shah Ismail, the Guilan territory was divided into two parts: Bia Pas, with Rasht as the capital, and Bia Pish, with Lahijan as the capital. Bia Pas was the term given to the lands to the west of Sefid-rud River while Bia Pish was used to refer to the eastern region.

So now, in addition to offering the sound of silence in Gileboom, which is loved by our guests, we shall tell them: Come on in! 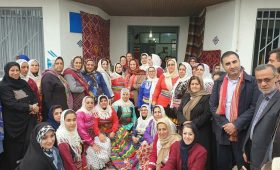