Konduj is traditionally used for the warehouse of rice stems, now it has turned into a tree house where kids can play and sometimes it is a place to sleep or a private room for guests.

We can provide mosquito net for sleeping here or if our guests have tent and sleeping bag they may easily set it up and have a nice sleep here.

There is a toilet and bathroom in the yard adjacent to Eco-Kolbe which can be used by the guests like to stay in the tree house.

Konduj warehouse is located on four wooden and polygon pillars that are usually rounded down at the bottom. There are some round and thick woods like the wheels of a car, but solid and smooth, on the pillars. They are called ratter; a simple but excellent technique to fend a mouse.

The story of Gileboom tree house

The konduj of Gileboom is eighty-three years old and is now considered as the oldest construction of it. It was standing silent for a long time in a house next to the crossroad “Chale-Sara”. This konduj, with a four-sided roof, was filled of the tools for agriculture, as it used more heat from the sun. Radiation of heat from the ceiling into the konduj heated it. The wooden and thatched walls did not let the heat out. In this way, immature rice became ripe as well.

We were informed that some people wanted to destroy and sell it to a coal plant. There should be no hesitation, so we sat off. We numbered its components, separated and brought them with a pickup truck to Gileboom. It would be interesting if time went back and we would become a student for the konduj-maker.

We lubricated the usable woods frequently. In the first year, we raised the main pillars and columns up with the help of the village’s hero, Mr. Mojtaba. Then we covered them with thick linens so that the rain would not ruin them.

In the winter 2016, we implemented its ceiling – not as a four-sided ceiling but as a two-sided one – to keep it cooler and have enough space to stand. We just used the titled woods for the walls and covered the floor with the wooden boards, so that the air would draft well unlike the previous status.

Now it has turned into a tree house where kids can play and sometimes it is a place to sleep or a private room for guests. 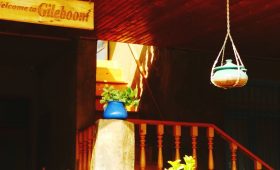 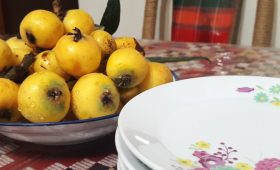